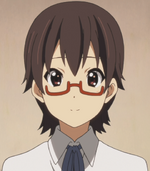 Nodoka Manabe (真鍋和) is a childhood friend of the Hirasawa sisters, and president of Sakuragaoka High School's Student Council. Her level-headed and professional attitude contrasts all of Ho-kago Tea Time's members, though most specifically Yui. She is also the only main character with no known musical skills.

Wakaba Girls (若葉ガールズ) is the band formed by guitarist Azusa Nakano, the only member of Ho-kago Tea Time remaining at Sakuragaoka High School after the four older members graduated. She is joined by friends Ui Hirasawa on rhythm guitar and Jun Suzuki on bass, along with freshmen Sumire Saitō on drums and Nao Okuda as the band's songwriter, mixer, and producer.

Girls In Wonderland is a song by Ho-kago Tea Time, sung by Mio Akiyama, and is the B-side to NO, Thank You!, on the album of the same name. In contrast to NO, Thank You!, which is about not wanting to graduate and grow up, Girls In Wonderland is about embracing that concept, and that no matter what comes their way, everything will be fine in the end.