Don't say "lazy" is the second album by the Sakuragaoka High School Light Music Club's band Ho-kago Tea Time, containing the songs Don't say "lazy" and Sweet Bitter Beauty Song, as well as their respective instrumental versions. The songs are sung by Yōko Hikasa with Aki Toyosaki, Satomi Satō and Minako Kotobuki as backup. It was released on 22 April 2009 in Japan by Pony Canyon alongside the album Cagayake! GIRLS.

The album can be found digitally on Spotify and physically at stores (including online ones). 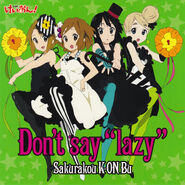 The cover of the album's limited edition.
Retrieved from "https://k-on.fandom.com/wiki/Don%27t_say_%22lazy%22_(Album)?oldid=48698"
Community content is available under CC-BY-SA unless otherwise noted.