Sakuragaoka High School's students have to take their final exams. In the meantime, Yui Hirasawa plans to participate in a local talent show for her neighbor, Tomi Ichimonji.

Early in the morning, Yui prepares herself for a morning jog while humming the tune of Fuwa Fuwa Time. Her sister, Ui, wishes her a safe trip and sends Yui on her way. After just a few steps, she pauses to greet her neighbor Tomi Ichimonji, who asks her what she is doing out so early in the morning. Yui declares that she has decided to do her best at everything, which includes running in the morning.

Moments before classes are about to begin, Yui sprints towards the school to avoid being late. Her friends Ritsu, Mio, Tsumugi and Nodoka notice her from their classroom window and urge her to hurry up. This backfires when Yui, excited to see them, misunderstands their cue and stops to wave at them.

Finally arriving at class, Yui lies down on her desk, completely exhausted from her morning sprint. She tells the others that she went through the effort because she wrote down that she intends to "do her best" on her career plan. This would have included guitar practice as well, but when reminded that finals are coming up soon, Yui's confidence quickly wanes. She ends up falling asleep during her first classes, leading Ritsu to punish her swiftly. To make up for it, Yui declares that she'll study properly for the upcoming exams.

Inside of the school's library, the four seniors of the Light Music Club decide to study together following classes. Yui, unable to focus, makes embarrassing comments on the notes of the other three and ends up doing crossword puzzles instead of studying.

After attempting to study, the group visits a supermarket so Tsumugi can make a copy of her notes for Yui. Ritsu uses the time to give Yui and Tsumugi two strong mint pastilles that sear their mouths and confuse Mio as she looks on.

On her way back home, Yui runs into Tomi again. Tomi presents her with some chikuzenni she made, leading Yui to ebulliently thank her by bowing down aggressively enough to smack herself on the back of the head with her own guitar. Tomi then praises Yui for being so devoted to music since she became a high school student.

At home, Yui is on cloud nine over Tomi's compliment. While playing guitar, she recalls all the times she and her family received Tomi's help, inspiring her to want to do something in return. Ui interrupts her sister's musings by calling her to come down to eat. While eating Tomi's present, Yui mentions that she wants to do something for Tomi to express her gratitude. Ui proposes baking some cookies for her, a proposal Yui eagerly accepts. Ui notes that she can't do so before the finals end, however, in order to make sure Yui focuses on her on exams. Remembering her vow once more, Yui promises to herself to study properly.

The next day at school, Ui tells her friends, Azusa and Jun, about Yui's ambition, which surprises Azusa in particular.

After school, Yui and the three other seniors are seen standing in front of an advertisement about clothes, longing for the exam prep period to finally end. Yui is the only one who can't contain herself and buys a new shirt of questionable taste.

Back home, Yui is struggling with focusing when she hears from Ui that they ran out of soy sauce. Yui uses the opportunity to get away from studying and starts running off to buy more. On her way, she is stopped by Tomi, who was on her way to the Hirasawa household. Yui, having already forgot the actual item she was about to buy, tells Tomi that they ran out of sugar and she was on her way to get more. Tomi gladly gives her a container of sugar and asks if Yui would consider participating in a local talent show the day after finals. The thought makes Yui nervous, given her already tight schedule due to studying, but she agrees to participate anyways in order to show her gratitude towards Tomi.

Back home, Yui realizes her mistake, forcing the two to eat dinner without soy sauce. While eating, the sisters discuss the talent show. Ui is understandably suspicious of Yui's ability to handle both finals and preparations for the show at once, but Yui reassures her sister that she'll continue to do her best.

The next day at school, Yui tells Mio, Ritsu and Tsumugi about her plans. The three are surprised to hear that Yui actually plans to perform on her own to prevent the others from getting distracted from studying. While Tsumugi offers Yui support, Mio and Ritsu can't take it seriously and start teasing their friend.

During physical education, Ui tells Azusa and Jun about Yui's plans. The thought of Yui doing it all alone worries Azusa.

After school in the evening, Azusa is riding back home from running errands on her bike when she sees Yui practicing guitar in front of a river bank. She joins Yui, asking her if she really is participating in the talent show. Yui affirms this and Azusa, still worried about Yui's ability to handle everything herself, offers to participate together with Yui, elating the senior.

The next day at school, Yui happily tells the other seniors about Azusa's assistance. At the same time, Azusa visits the class. Yui ecstatically dashes towards her, but Azusa stops her with the strict schedule she made for Yui and herself in order to get everything Yui wants to accomplish done on time. While dragging Yui to the library, Mio, Ritsu and Tsumugi decide that Azusa has the situation well in hand this time.

Inside the library, Ui and Jun watch Azusa as she tries to encourage Yui to learn properly as Yui gets distracted drawing pictures of Azusa and generally messing around.

In the evening at the river bank again, Yui and Azusa start practicing for the talent show. Since the majority of the audience will be old people, the two try to sing their band's song Fuwa Fuwa Time in an enka-style, but Azusa quickly rejects the idea, unable to adapt to the new style. Yui then proposes Traditional Japanese music and starts singing the old traditional song "Kokiriko-Bushi", as well as encouraging Azusa to sing too. Just as Azusa is about to lose her focus, Tomi shows up with some beef croquet for them. Azusa points out that Tomi appears to be a nice person, with Yui agreeing and saying that that's why she feels the need to do well in the talent show. As they eat, the two address the question of what to name their duo. After some discussion, Azusa comes up with "YuiAzu" (ゆいあず), which is happily approved by Yui.

The next day at school, The senior group is put off by their teacher Sawako Yamanaka, who is suffering from the lack of the tea and sweets after school and begs the club to have another tea party. Upon being reminded that club activities are suspended during the exam period, Sawako asks Ritsu if the rules could possibly be more important than she is, which Ritsu naturally affirms.

Finally, the day of finals arrives. While taking her history test, Yui falls asleep. Nodoka notices this and wakes her up by intentionally dropping her eraser and asking the teacher aloud to pick it up. Despite being extremely tired, Yui forges ahead and sleepily finishes her exams.

The next day, Yui and Azusa are waiting for their turn at the local talent show. Tomi, Sawako, Ui, Nodoka and the rest of Ho-Kago Tea Time are among the audience as well. While waiting, Yui falls asleep again. Understanding how hard Yui has been working, Azusa lets her sleep until they are up. After introducing themselves as "YuiAzu", the duo starts with their performance.

At first, the two put on an act akin to Manzai-comedians before singing a special version of their band's song Fude Pen ~Ball Pen~. The audience and especially Tomi enjoy the performance. After finishing their song, they exit and the next participant comes onto stage.

After the show ended, Yui offers Tomi their consolation price. Yui admits that she originally planned to win the first prize, a vacation at an onsen, for Tomi. Tomi replies that she was already satisfied by the performance itself. She praises Yui, telling her that Yui has grown up a lot, a compliment that makes her blush, before inviting everyone over for dinner.

Several days later, Yui and the other seniors of the Light Music Club are astonished by Yui's high scores on her finals. Tsumugi mentions that she wanted to be on the stage with Yui too, leading Yui to propose performing as "YuiMugi" next time. Following the pattern, Ritsu asks Mio about "RitsuMio" to which Mio answers that she would prefer "YuiMugiMioAzu" instead, leaving Ritsu indignant and the others laughing at Mio's proposal. 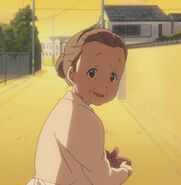 Yui runs into her neighbor Tomi.

Yui studying by herself for her finals.

Ritsu guessing on her exams.

1Yui falls asleep in the middle of her exam.

Tomi at the talent show.

Yui gets high marks on all of her exams.
Add a photo to this gallery