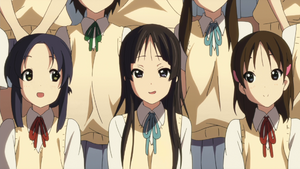 The Mio Akiyama Fan Club was formed soon after the Light Music Club's performance during the Sakuragaoka High School festival. During the concert, Mio tripped on a wire and fell over, revealing her panties to the crowd. This was likely a major factor in the creation of the fan club soon after.

Megumi Sokabe was the founder and president of the fan club during her last two years in high school. She stalked Mio at some point, and when she ran into Mio discussing the stalker issue with Nodoka Manabe, Megumi eventually admitted that she was the stalker as well as the president of the club.


After Megumi graduated, Nodoka reluctantly took on the job of president. She regretted not doing much and eventually asked the Light Music Club to organize a tea party for the fan club. During the tea party, a slideshow featuring photographs from Mio's life was shown, a question-and-answer session for Mio was held, and Ho-kago Tea Time performed their most recent song, Pure Pure Heart. Megumi was unable to attend the tea party, but she was sent a photograph with all the attendees, which she enjoyed.

Retrieved from "https://k-on.fandom.com/wiki/Mio_Akiyama_Fan_Club?oldid=46442"
Community content is available under CC-BY-SA unless otherwise noted.