Volume 1, Chapter 5 is a chapter of the first Volume of the K-ON! Manga by Kakifly.

The members of the Light Music Club are at the sea. Ritsu and Yui are hyped up about their trip unlike Mio who scolds them.

During a flashback, it is shown that Mio came up with the idea of having a training camp to improve their musical skills. Ritsu and Yui were just focused on having fun, although Mio intended to have the training camp so that their club is ready for the school festival after the summer break, where she plans to have a performance with the others together.

Ritsu started teasing Mio until she got hit by her while Tsumugi calmed Mio down. Ritsu and Yui then started nagging since they weren't willing to spend much money for the trip. Mio asked Mugi if she has a villa where they could spend their time which Mugi affirmed, much to the surprise of the others. Arrived at the villa, they are shocked about how big it is although Mugi mentions that she wanted to get a bigger one since this is the smallest of them. Ritsu and Yui instantly prepare to have fun at the sea and since she got left behind, Mio follows them under tears as well. While playing at the beach, Ritsu notices Mio's large bust and hits her with her beach ball out of envy. As time goes by, Mio forgets her true intention and has even more fun as the others, a fact that shocks her afterwards. Inside of the house, they notice that they have impressive equipment to play music. However, Ritsu is too tired for it and wants to sleep until Mio tricks her into playing by saying that Ritsu might have gained some weight since she wasn't playing the drums much lately. After playing, Mugi praises Yui's improvements in playing guitar.

Mio states that she would be perfect once she learns finer techniques like sliding or choking, leading Ritsu to put Yui in a chokehold. Mio explains Yui the real thing and after Yui got it right for the first time, she started laughing about the pitched sound. After a short while, Yui got tired since her guitar is rather heavy, leading her to ask about the culprit who told her to buy such a heavy guitar, to which Mio replies that it was Yui herself. After the training, the four take a bath outside. Mio and Mugi are satisfied with the results, noticing that they shouldn't have worried so much, leading Ritsu to scold them since they could have played more at this rate.

Yui realizes that making music is much more fun than expected and thanks Mio for suggesting the training camp, forcing Mio to blush out of embarrassment. 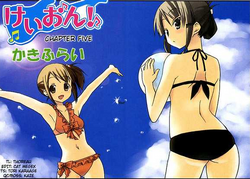 A colored version of the cover for Chapter 5
Add a photo to this gallery
Retrieved from "https://k-on.fandom.com/wiki/Volume_1,_Chapter_5?oldid=45018"
Community content is available under CC-BY-SA unless otherwise noted.